Klosters is located around 2 hours’ drive away from Zurich, the nearest airport, and 3 hours from Basel. It is also possible to fly to Milan, around a 3-hour drive away, and Friedrichshafen, which is about a 2-hour drive away. There is motorway between Basel, Zurich, and Chur, which passes through the town of Landquart, where you leave the motorway for a smaller, prettier road. The ascent to Klosters through the beautiful Prättigau valley takes about half an hour.

It is very easy to reach Klosters by train. There are direct trains to Zurich from Paris and Amsterdam. At Zurich Airport, the platform is located in the basement, just a few minutes’ walk from the baggage collection area. After a 10-minute ride into Zurich Central Station, you board the train for Landquart, where you change to the Rhaetian Railways narrow-gauge railway network for the pretty ride up the valley to Klosters. Thanks to efficient connections, the total journey time from Zurich is 2 hours. Trains can be booked one month in advance at www.sbb.ch. 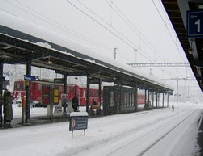 …and the trains run on time even when it snows!

Apartment in Klosters: Hus am Golfplatz 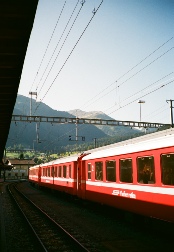 Klosters is in the Graubünden region in the east of Switzerland, close to the Austrian border. Situated at 1200 metres (3,937 ft) above sea level, it has an excellent snow record. It is easily reached in about 2 hours by car or train from Zurich and is 6 hours from Munich and 11 hours from Frankfurt am Main. There are trains every hour to Klosters from Zurich, Basel, and St. Margrethen.